Hey guys! Quick post just to bring you the VOD of the Twitching Hour we did yesterday night, in case you missed it live on our Twitch channel.

Ok, actually, this has nothing to do with Valentine’s Day, it just happens to be tomorrow and I thought I’d mention it in the title. We don’t really celebrate it over here, either, it’s just an excuse for bars to have themed parties, so let’s get back to the business at hand: za game!

Last week has been pretty much business as usual: me painting backgrounds, Cami animating, Nicu polishing the lights and shadows shaders and re-testing the former demo area.  Other than re-painting the backgrounds and adding shadows to the former demo area – I mean what is playable in the demo – we’re also altering the puzzle design slightly, namely moving some objects around and changing the way some dialogue and interactions work.

See, here’s the trouble with the demo: it’s the first thing that I’ve ever designed for the game, so it carries certain 1st time blemishes. We’ve also launched it without it having been tested by anyone but ourselves, so a weird thing happened: our so-called play-testing sessions were watching people play it on youtube and screaming at the screen “noooo, you were supposed to–“… and, of course, realizing it was our fault, not theirs, that they were stuck.

It wasn’t necessarily major stuff, but we learned that signposting and making what is happening as clear to the player as possible is crucial. So if you got stuck during the demo, don’t worry, you won’t run into the same problems in the final game. By the way, here’s someone who didn’t get stuck :

What else have we been up to – well, I made this:

Hey, cultists! In case you missed our "Drawing Lovecraftian Monstrosities" stream on https://www.twitch.tv/liviuboar here's a sped up version of that. Three hours worth of sketching cosmic horror bizarreries compressed in five minutes. Enjoy!

Posted by Gibbous: A Cthulhu Adventure on Montag, 6. Februar 2017

Which got 4,000 views on facebook. Happy about that! It’s a stream I did  on our Twitch channel and compressed down to 5 minutes from 3 hours.

And this week-end I fiiiinally finished one of the most demanding backgrounds yet. Here’s a sneak peek: 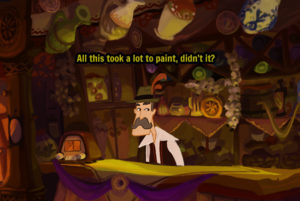 And that’s that for this post! Back to painting and going over puzzles again.

Have a butt-kicking great week!

I think I spent upward of 30 seconds wondering whether the “and” in the title should be capitalized, I can never remember that kind of stuff. Anyway, here’s a Gibbous blog post! Yay.

Maybe I mentioned it in my previous post (did I?), but this blog is supposed to be a little something to tide you over information-wise in between the big Kickstarter updates, if you want to stay up to date more often.  So here’s our current status report:

Production is going really well.  My main output for months now has been (predictably) background art, and spending so much time rendering the places you’ll visit in Gibbous payed off.  They take slightly less to produce and look significantly better, to the point where I now also go back to previously finished ones and try and get them looking as good as the new ones.

As with any living work of fiction, there are small part that get added or cut. In our case, it’s a helluva lot more likely for stuff to be added rather than removed. That’s great for the game, but it also means spending some extra extra hours in the office.

Cami’s been doing some work on idle animations for Kitteh and Don, and next week she’ll be handling some more special, plot-related animations. It feels good being able to just send some frame by frame work her way and let her handle it entirely.  It’s a great load off my chest.

Nicu’s been adding rooms that we’ve finished, and also going back to the demo rooms, replacing old art with the updated one and adding dynamic lighting and shadows.

We’re good. We’re doing great work, only staying inside because of the horrible weather, getting a lot done.

Man, I should finish writing that Kickstarter update!

This is a quick test post for our brand spanking new blog.  Remain calm and stay inside, there is nothing wrong with your receivers, the Old Ones are coming just as it was prophesied.